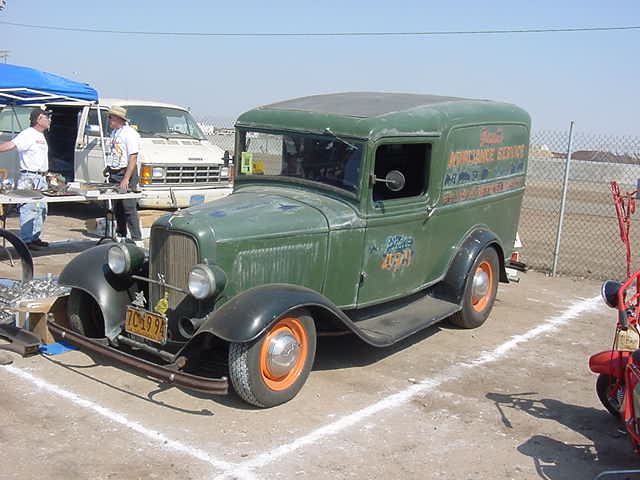 Here’s a picture that I took of Paul out at the Bakersfield “Hot Rod Reunion” in October of 2004. He had a flea market set up just past the quarter mile, not far from the spot where he crashed in a FED about 10 years before I took this picture. The whole crash thing is double slow-mo documented in one of the Jackson Brother’s DVD videos. He never drove a dragster after that.

That’s him on the far left. And that is his ’32 Ford panel truck. He drove that out to Famoso… and overheated it. Evevrbody knows, you can’t drive a flathead on the Interstate… they will overheat every time. Henry didn’t know anything about Interstate highways yet, and the way the flathead scavages it’s exhaust from the inner cylinders puts heat right into the block. He found that truck with the lettering of “Paul’s Appliances” already on it…!!!

Paul went on to become one of Kieth Black’s best engine builders for several years. He has also done a very excellent resto-rod project of a ’34 Ford roadster that made the cover of “Hot Rodder’s Journal”